This section of Obscure Finds Numismatic Collection is about a Mint (an industrial facility which manufactures coins for currency) from the Australia region referred to as the Royal Australian Mint. 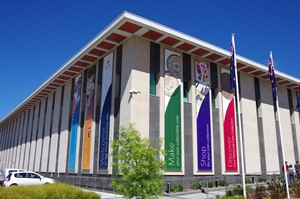 
Other World Mints from the Australia region
Pictures From Canberra, Australia

The establishment of the Royal Australian Mint at its final site in Canberra followed propositions to place it near to the present National Library and on Camp Hill, between the Old Parliament House and Capital Hill. The Commonwealth Government approved the construction of the Mint in 1962 and construction commenced in 1963 on a site in the Canberra suburb of Deakin.

As well as the Mint's functions to produce Australia's coinage, it produces coins for other countries, along with medals, medallions, tokens and seals for private clients, both national and international.

Mint opening hours
Open: Monday to Friday 8.30 am to 5 pm
Saturday, Sunday and public holidays 10 am to 4 pm